I Fit the Description

When I was a 13 year old boy, I was stopped by a white police officer during winter break walking from home to basketball practice at Memorial Junior High School in South Euclid, Ohio. My mother decided to take a chance and moved us to a predominantly white neighborhood just three years earlier, primarily in search of a better long term educational experience. My experience with the police was certainly educational, but obviously not the variety of education that my mom had hoped for.

The officer immediately turned on his sirens, yelling through the speaker “Get your hands up! Don’t move!” His patrol car impeded my ability to continue walking at the crosswalk, as he hopped out and aggressively drew his firearm continuing to shout “DON’T MOVE!”   He shouted and contentiously asked for my ID and when I couldn’t produce one (remember, I was 13), he put me in the back of his cruiser. By this time back-up had arrived and a 10-minute conversation ensued between the two officers. They decided that Officer #2 would drive back to the auto shop, pick up the owner, and bring him back to determine whether or not I was the criminal.

The 20-plus minutes I spent waiting in the back of that cramped police car for the owner to arrive felt like 20 hours. When the owner of the auto shop arrived, I saw that he was white too. He was hesitant, almost seemingly attempting to transform my face into the lawbreaker’s, but came to the conclusion that I wasn’t the guy. The officers proceeded to let me out the back of the cruiser, and candidly said, “make sure you stay out of trouble!” 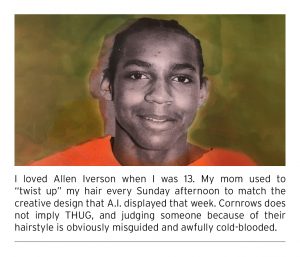 I’m sure you can imagine all of the emotions that would be common for a situation like this. Anger and fear primarily. If I’m being honest, the only thing I was scared of was being late for practice and having to run extra sprints. I somehow let it go immediately. Was I giving them a “mistakes happen” pass? Did I give them the traditional benefit of the doubt “I can see why they stopped me.” Did I bury it and attribute it to being black and “That’s just the way it goes?” Or Maybe it was because a year prior, a white police officer showed up to my house, after I dialed 9-1-1, with extraordinary care and concern for my mom’s well-being after her boyfriend broke her nose with one cowardly blow to her face. He helped escort my mom and I to the ambulance and even stuck around the rest of the day just in case that $%@% came back. Please forgive my language.

Whatever the case, I didn’t allow my anger, frustration, confusion, or feeling of helplessness stop me from getting to practice; from accomplishing my mission. In my mind, practice led to great performances, which would carry over into high school, which could earn me a scholarship to a great college like THE Ohio State University, which would put me in position to make it to the NFL, which would allow me to generate enough income to protect my mom for the rest of her life. Life is 10% what happens to you and 90% how you respond. I know it sounds silly, but as a 13 year old I knew I had to let that experience go in order to move forward with my inner motivation, to be the greatest student-athlete my city had ever seen.

“I somehow let it go immediately.”

There were two attributes of mental toughness that assisted me in accelerating my healing and my ability to move forward quickly, and I believe they will help you as well.

The story goes: A strong man, armed to the teeth, equipped with hate and evil as his weapons of choice, is guarding his recently acquired stolen property. If a stronger man approaches, with more experience and superior weapons (love and forgiveness), he will overtake the strong man and take back what was stolen.

Love and forgiveness are the unexpected superior weapons that will conquer hate, evil, and racism.

Let me explain in a different way. Have you ever heard the story of David and Goliath? If you haven’t, the condensed version is a scrawny teenager, David, defeated a great warrior, Goliath (8 feet tall, 400 pounds) in combat with a makeshift slingshot and a few stones instead of using the typical sword. He used an unexpected tactic to take down a seemingly undefeatable opponent. The very thing that Goliath used to sharpen his sword (a stone), was used to shatter his reign. Again, love and forgiveness are the unexpected weapons that will shatter the reign of racism.

Forgiveness, believe it or not, is for you, not them. We must forgive those who have wronged us; not because they deserve to be forgiven, but because we love ourselves so much we don’t want to keep paying for their injustice. Yes, facts are facts, but you have to fight your way out of the blame game. Blaming anoints the oppressor as the savior. The person that you blame for causing you harm is not capable of helping you heal; unless you forgive them. Don’t let what’s held you, hold you anymore. Forgive.

Forgiveness does NOT mean that the offense didn’t happen and it’s not saying “it’s ok” or issuing a pardon. It does however give you a direct pathway to the emotional and mental freedom that has been eluding you for years. Many will find the task of forgiveness to be the hardest thing that they’ve ever done; mostly because they’ve never forgiven themselves. The hardest person to forgive is not them, it’s YOU. You will never be able to forgive another person if you’ve never forgiven yourself for your mistakes, wrongdoings, or for allowing another person to be hurt on your watch, when you could’ve done something to stop it. Forgiveness is not a feeling, so stop waiting for it. Take responsibility for your own life and forgive now. Removing concrete statues is impactful symbolism, but until we remove the “statue” of unforgiveness in our hearts, the monument of hurt will always remain.

Forgiveness of others and forgiveness of self can not be accomplished without love. Love is the most powerful force in the universe. I’m not referring to romantic love or a great interest in something; like food, or sports. I’m talking about real, authentic, aged in barrels of the sulfuric core of the earth since its inception type of LOVE. We have to love each other as if our lives depend on it, because it does! Real love is a prioritized, intense care and concern for the overall well being of all human beings.

We can succeed with love alone. Even if you possess all of the knowledge and skill in the world, without love we will fail. Love’s characteristics are unmatched and unparalleled. Love never gives up. Love cares more for others than self. Love is incredibly patient and love doesn’t fly off the handle. Love always looks for the best in others and doesn’t have an ego. Love doesn’t force its opinion on others. Love isn’t “me first”. Love is a safe place of shelter. Love never looks back. Love doesn’t keep a record of past wrongs. Love sees people for who they are, not how they appear.

Are you starting to understand now?

Highly paid public relations teams unify vowels and consonants to produce a cavalcade of sentences in official statements that promote love and declare an allegiance to equality; but until people empathize and grieve with black people whose families and relationships were destroyed publicly through senseless acts of violence, injustice, and murder, those words on the page are as worthless as pair of Jim Harbaugh’s Walmart khakis in a Buckeye Cruise silent auction.

No more excuses for being silent. Excuses are the crutches of the uncommitted. Focus on what you need to do and not on how you feel. Reasons for being passive now, open the door for treason later. Can’t you feel the vibration of the incipient change in our country? Silence is not an option.

If the answer is yes, you probably fit the description of the person that stole the solution for a better future. Now use it.

Evil and hate chaperone racism, but love and forgiveness will escort change.

Roy Hall Jr. is the Executive Director of the Driven Foundation, Co-Host of the Always Ready Podcast,  a former Ohio State & NFL WR, and national keynote speaker. Roy can be reached at here. 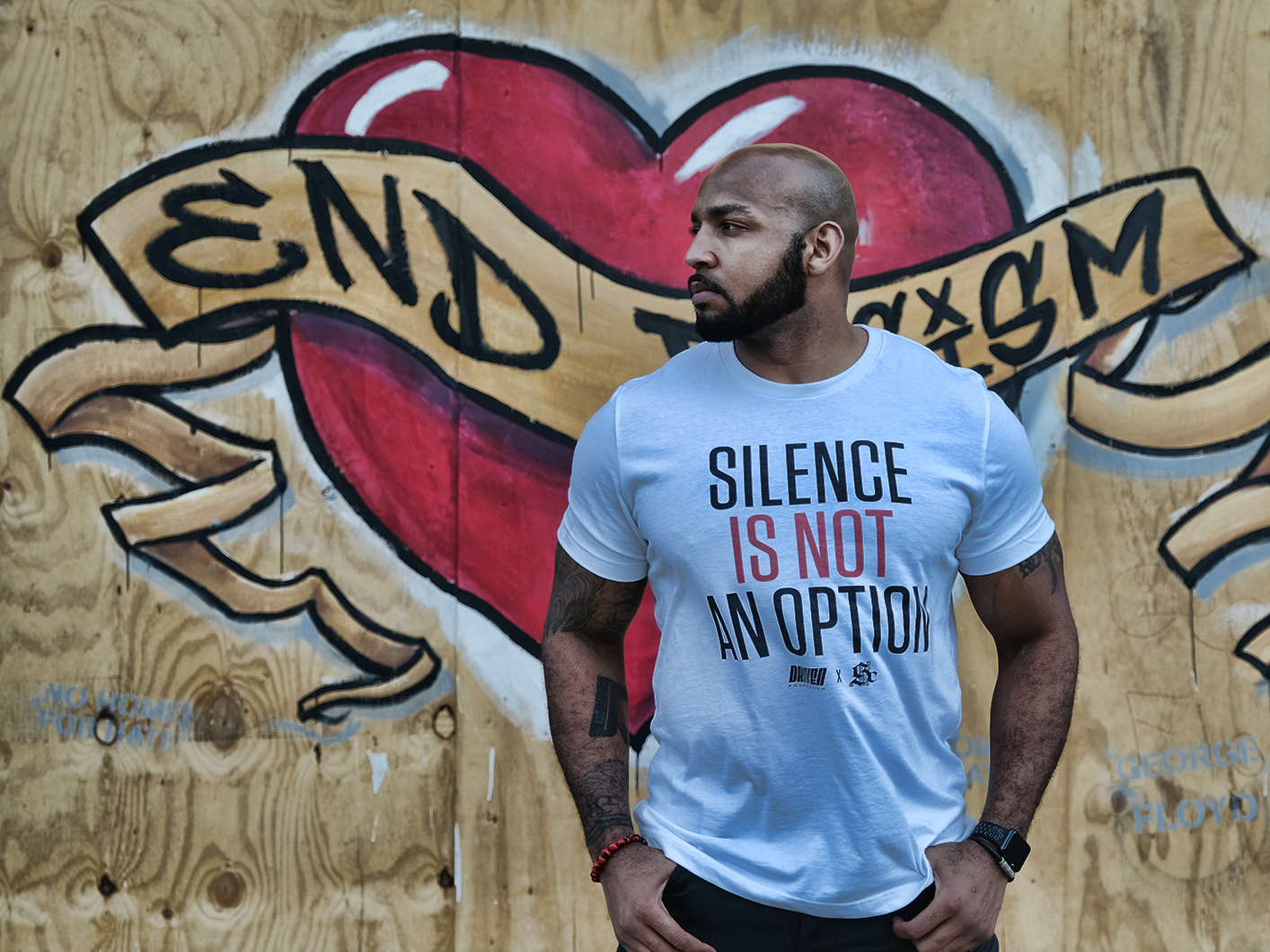 Silence Is Not An Option Tee

Evil and hate chaperone silence. Your voice and love escort change. Don’t let the fear of not being able to do enough stop you from doing something.

Our Silence Is Not An Option Tee is a powerful way to make a statement and make a difference.

Proceeds will help provide inner city families with masks and food over the summer, and the Columbus Freedom Fund.

Silence Is Not An Option

Don’t let the fear of not being able to do enough, stop you from doing something. SILENCE IS NOT AN OPTION.

Evil and Hate chaperone silence; but your voice and love escorts change. Start where you are use what you have and do what you can do.

Silence is not an option!